Tare Lakemfa, Esq was called to the Nigerian Bar in 1993 after obtaining his LL.B degree from the Rivers State University of Science and Technology in 1992. He was appointed as an Associate Counsel in Chief Gani Fawehinmi (SAN) Chambers in 1994 after his National Youth Service where he acquired valuable experience in litigation and research. He was also a member of the Editorial Board of the Nigerian Weekly Law Reports.

He obtained his LL.M (Masters in Law) from the University of Lagos in 1998 and thereafter joined the Law Firm of Anga & Emuwa (one of the firms that metamorphosed into AELEX Solicitors). 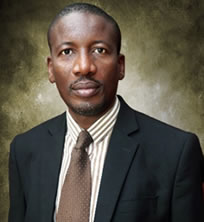 He was later appointed Head, Legal in Haggai Mortgage Bank in 2003, a position he held till 2008 when he voluntarily resigned and went into private legal practice. In September, 2014, he was appointed an aide of the Governor of Bayelsa State. Mr. Lakemfa is well experienced in litigation, Corporate and Commercial law and Administration among others. He is an associate of the Chartered Institute of Arbitrators (UK). He has also attended various pertinent trainings and seminars. He is married with children.