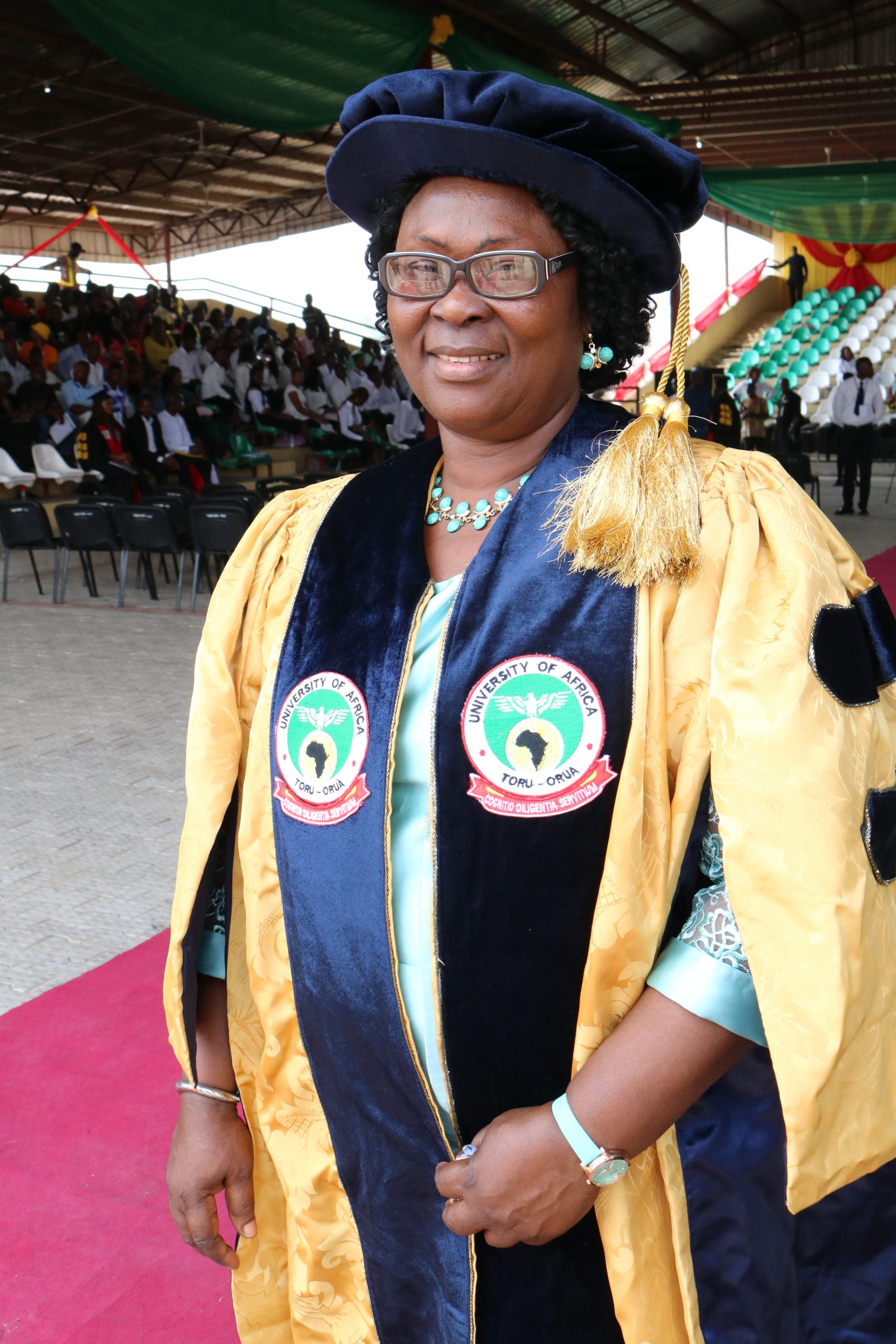 Dr (Mrs) Rose Okiy ( Ph.D, CLN, FNLA, MCLIP, ALA), a Certified Librarian (CLN) and a Fellow of the Nigerian Library Association (FNLA). She obtained her first School Leaving Certificate from Okotie-Eboh Primary School, Sapele in 1969 and her West African School Certificate in 1974 from Chude’s Girls’ Grammar School, Sapele, she also obtained a B.Ed (Hons) degree from the University of Benin, Benin City, 1979, a Master in Library Science (MLS) degree from University of Ibadan,1983, Executive Diploma in Computer Science ,1997 from Delta State University, Abraka and a Ph.D degree in Library Science from the University of Ibadan in 2004.

Dr (Mrs) Okiy has over 50 publications in various aspects of librarianship, published in both local and international journals. Some of them have won international awards of excellence such as Emerald Award of Excellence for Outstanding paper in 2004. She also published four books on librarianship. She was also involved in part-time lecturing at the Diploma, under-graduate and post-graduate levels at the Institute of Education and the Department of Library and Information Science of Delta State University, Abraka. from 1995 to 2015. Dr (Mrs) Okiy has been involved in Editorial work for several librarianship journals both local and foreign, eg. African Journal of Library, Archives and Information Science (AJLAIS), Botswana; Member, International Information and Library Review, USA, among several others.

She was a Member of Council of the Librarians’ Registration, etc., Council of Nigeria (LRCN) from 2003 to 2005; Member of Council, African Library and Information Associations and Institutions (AFLIA); Member, Chattered Institute of Library and Information Professionals, United Kingdom (MCLIP); Member, American Library Association (ALA); Member Standing Committee of Africa Section of the International Federation of Library Associations and Institutions (IFLA), Member, Institutional Accreditation Team to Federal Universities of Technology, Akure and Ekiti State University, Ado-Ekiti in 2011. She was involved in the regular assessment and interviews of librarians for various positions including College Librarians; Deputy University Librarians and University Librarians between 2007 and 2015 in several higher institutions which include: Obafemi Awolowo University, Ile-Ife; Western Delta University, Oghara; Federal University of Petroleum Resources, Effurun, Warri; College of Education, Warri and Elizade University, Ilara- Mokin.

Furthermore, in her professional association in Nigeria, she has held several offices at both State and National levels, she was the National 1st Vice-President of the Nigerian Library Association (NLA),from 2010-2014, the National 2nd Vice-President of NLA from 2007-2009, National Councilor, NLA, from 1998-2000; National Financial Secretary of the Association of Women Librarians of Nigeria (AWLIN), from 1998-1999. At the state level, she was the Chairman, Delta State Chapter of NLA from 2000-2004 and Vice-Chairman, from 1996-2000. At the international level, she has attended several conferences of the International Federation of Library Associations and Institutions (IFLA), including those held in Quebec, Canada in 2008; Milan, Italy in 2009; Gothenberg, Sweden in 2010; Puerto-Rico in the USA in 2011; Singapore in 2013; Lyon, France in 2014; Cape Town, South Africa in 2015 and Columbus, Ohio in August, 2016. She has also attended several workshops and seminars in the librarianship profession at both National and International levels including the International Top Executive Training Programme held in New York in September, 2012 and in Houston, Texas, USA in June, 2015. She also attended the IFLA International Advocacy Programme (IAP) Workshop in Pretoria, South Africa in November,2016.

During her sabbatical year at the Rivers State University of Science and Technology (RSUST), PortHarcourt in 2016, she assisted the University to draw up a new programme for Library and Information Science leading to the establishment of a new Department of Library and Information Science in September, 2016 and was appointed the pioneer Head of Department. She has won a number of awards which include the highest award from her professional body in Nigeria called the Fellowship of the Nigerian Library Association (FNLA). Dr (Mrs) Okiy is married to Prince Spencer U. Okiy and they are blessed with children.